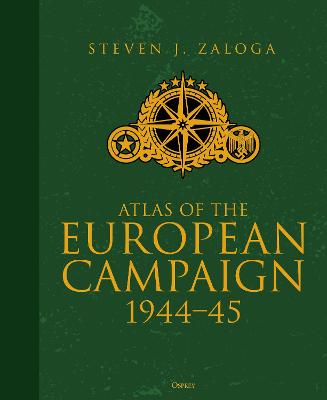 Atlas of the European Campaign

Description - Atlas of the European Campaign by Steven J. Zaloga

In June 1944 the Allies opened the long-awaited second front against Nazi Germany on the beaches of Normandy, and this was to be the start of a long struggle throughout Western Europe for the Allied forces in the face of stiff German resistance.

The European Theatre was where the bulk of the Allied forces were committed in the struggle against Nazi Germany. It saw some of the most famous battles and operations of the war - Normandy, Market Garden, the Battle of the Bulge - as the Allies sought to liberate Western Europe in the face of bitter and hard-fought German resistance. From the beaches of D-Day through to the final battles in war-ravaged Germany, the war across the breadth and depth of Western Europe is brought to life through scores of carefully researched and intricately detailed maps.

» Have you read this book? We'd like to know what you think about it - write a review about Atlas of the European Campaign book by Steven J. Zaloga and you'll earn 50c in Boomerang Bucks loyalty dollars (you must be a Boomerang Books Account Holder - it's free to sign up and there are great benefits!)

Steven J. Zaloga received his BA in History from Union College and his MA from Columbia University. He has worked as an analyst in the aerospace industry for over two decades, covering missile systems and the international arms trade, and has served with the Institute for Defense Analyses, a federal think tank. He is the author of numerous books on military technology and military history, with an accent on the US Army in World War II, as well as Russia and the former Soviet Union. He lives in Maryland, USA.