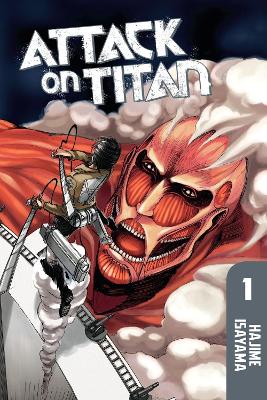 Winner of the 2011 Kodansha Manga Award (Shonen) and nominated for the prestigious Osamu Tezuka Cultural Prize for 2012.

The megahitAttack on Titananime is back, with Season Three announced for 2018!

In this post-apocalytpic sci-fi story, humanity has been devastated by the bizarre, giant humanoids known as the Titans. Little is known about where they came from or why they are bent on consuming mankind. Seemingly unintelligent, they have roamed the world for years, killing everyone they see. For the past century, what's left of man has hidden in a giant, three-walled city. People believe their 50-meter-high walls will protect them from the Titans, but the sudden appearance of an immense Titan is about to change everything.

Winner of the 2011 Kodansha Manga Award (Shonen) and nominated for the prestigious Osamu Tezuka Cultural Prize for 2012.

Other Editions - Attack On Titan 1 by Hajime Isayama » Have you read this book? We'd like to know what you think about it - write a review about Attack On Titan 1 book by Hajime Isayama and you'll earn 50c in Boomerang Bucks loyalty dollars (you must be a Boomerang Books Account Holder - it's free to sign up and there are great benefits!)