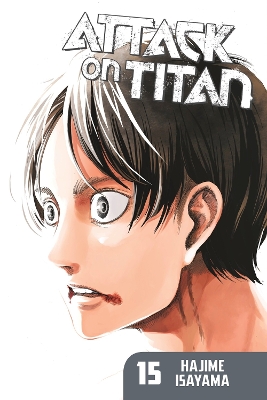 A monster hit in Japan, where it has sold over 40 million copies! And in the U.S., where there are over 1.8 million copies in print!

What's left of humanity lives in fear for their lives in this exciting, terrifying manga that's a number one bestseller in the U.S. and Japan. Humankind is down to just a few thousand people who live inside three concentric walls that protect them from the ravenous, giant Titans. The Titans appear to have only one purpose- to consume humanity.

Series Overview- Humanity has been devastated by the bizarre, giant humanoids known as the Titans. Little is known about where they came from or why they are bent on consuming humanity. Seemingly unintelligent, they have roamed the world killing off humankind for years. For the past century, what's left of mankind has hidden in a giant, three-walled city. People believe their 100-meter-high walls will protect them from the Titans, which are 10 to 20 meters tall. But the sudden appearance of of an immense Titan is about to change everything.

» Have you read this book? We'd like to know what you think about it - write a review about Attack On Titan 15 book by Hajime Isayama and you'll earn 50c in Boomerang Bucks loyalty dollars (you must be a Boomerang Books Account Holder - it's free to sign up and there are great benefits!)

With his debut series, Attack on Titan, Hajime Isayama has enjoyed a meteoric rise from unknown to one of Japan s top comics artists.