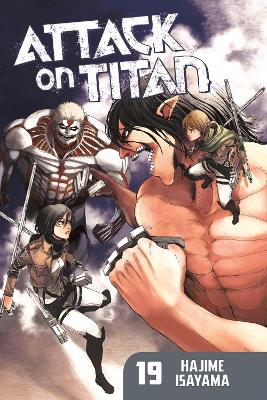 Attack on Titan is the award-winning and New York Times bestselling series that is THE manga hit of the decade! Spawning the monster hit anime TV series of the same name, Attack on Titan has become a pop culture sensation.

CAGE MATCH
The Survey Corps is engaged in a desperate, final battle to retake Wall Maria and defeat the Titans once and for all. Eren must use his new powers to seal the holes created five years ago in the Shiganshina District gates, not to mention to finally reach the basement of his old home and find what secrets lie hidden there. But the most difficult part of the operation will be surviving whatever clever traps the Colossus Titan, Armored Titan, and Beast Titan have prepared for them! Now that Erwin is gambling with every last human life, who will triumph?

» Have you read this book? We'd like to know what you think about it - write a review about Attack On Titan 19 book by Hajime Isayama and you'll earn 50c in Boomerang Bucks loyalty dollars (you must be a Boomerang Books Account Holder - it's free to sign up and there are great benefits!)