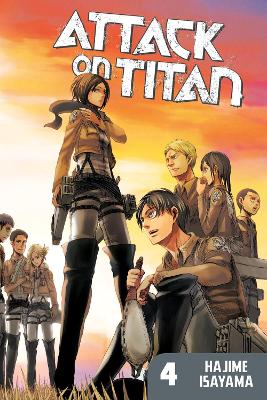 The Survey Corps develop a risky gambit - have Eren in Titan form attempt to repair Wall Rose, reclaiming human territory from the monsters for the first time in a century. But Titan-Eren's self-control is far from perfect, and when he goes on a rampage, not even Armin can stop him! With the survival of humanity on his massive shoulders, will Eren be able to return to his senses, or will he lose himself forever?

» Have you read this book? We'd like to know what you think about it - write a review about Attack On Titan 4 book by Hajime Isayama and you'll earn 50c in Boomerang Bucks loyalty dollars (you must be a Boomerang Books Account Holder - it's free to sign up and there are great benefits!)