CAN YOU GO HOME AGAIN?

CAN YOU GO HOME AGAIN?

Thanks to Eren, humanity has taken the town of Trost back from the Titans. Exhausted, Eren falls into a coma for three days - and wakes in shackles, staring at Erwin Smith, leader of the Survey Corps. Certain that Eren's father's research holds the key to the mystery of the Titans' rise, Smith wants an expedition to retrieve it from the house where Eren grew up. But that's deep in Titan territory, and to get there Eren will need to master a power he still doesn't fully understand...

Other Editions - Attack On Titan 5 by Hajime Isayama 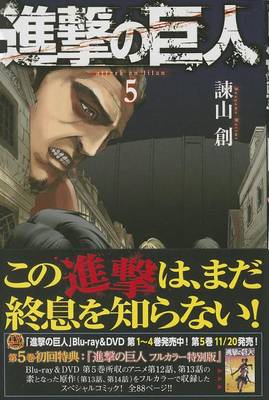 » Have you read this book? We'd like to know what you think about it - write a review about Attack On Titan 5 book by Hajime Isayama and you'll earn 50c in Boomerang Bucks loyalty dollars (you must be a Boomerang Books Account Holder - it's free to sign up and there are great benefits!)