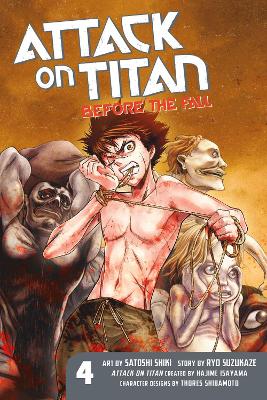 Attack On Titan: Before The Fall 4

Description - Attack On Titan: Before The Fall 4 by Hajime Isayama

A gory, dark prequel series to Attack on Titan!

A prequel series to the number one bestseller. Humanity has learned to live in complacency behind its high walls, protected from the giant Titans. But when a Titan-worshipping cult opens one of the gates, a Titan wreaks havoc, consuming the cultists. After the rampage is over, two young Survey Corps members are shocked to discover a pregnant woman's partially digested corpse - with her baby still alive inside it! What will the fate of this "child of the Titans" be? And how will humanity learn to cope with the Titan threat?

Series Overview- This prequel series to the main Attack on Titan series is set before humanity had the weapons to effectively combat the Titans, when the Survey Corps was nothing but a group of ambitious soldiers who dared to dream of Titan extinction.

Book Reviews - Attack On Titan: Before The Fall 4 by Hajime Isayama

» Have you read this book? We'd like to know what you think about it - write a review about Attack On Titan: Before The Fall 4 book by Hajime Isayama and you'll earn 50c in Boomerang Bucks loyalty dollars (you must be a Boomerang Books Account Holder - it's free to sign up and there are great benefits!)

A Short History of Nearly Everything
Bill Bryson
$19.99 $24.99
More Books By Hajime Isayama
View All