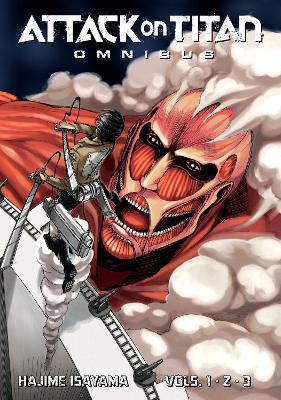 It's never been easier to attack Attack on Titan than with these new, giant-sized 3-in-1 omnibus editions! If you've been waiting for the final anime season to check out the do-or-die shonen adventure that defined a decade, now's your chance. These new books tuck almost 600 pages of manga behind a specially-embossed cover, all in a larger size than the regular version.

Includes Vol. 1-3 of Attack on Titan.

For eons, humans ruled the natural world. But a century ago, everything changed when the Titans appeared. Giant, grotesque parodies of the human form, these sexless monsters consumed all but a few thousand human beings, who took refuge behind giant walls. Today, the threat of the Titans is a distant memory, and a boy named Eren yearns to explore the world beyond the wall. But what began as a childish dream will become an all-too-real nightmare when a Titan finally knocks a hole in the wall, and humanity is once again on the brink of extinction...

» Have you read this book? We'd like to know what you think about it - write a review about Attack on Titan Omnibus 1 (Vol. 1-3) book by Hajime Isayama and you'll earn 50c in Boomerang Bucks loyalty dollars (you must be a Boomerang Books Account Holder - it's free to sign up and there are great benefits!)


A Preview for this title is currently not available.
More Books By Hajime Isayama
View All