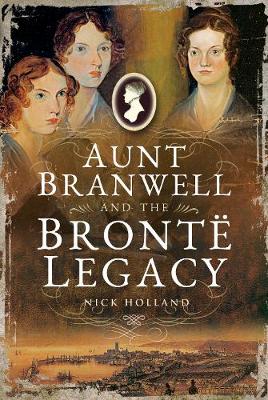 Aunt Branwell and the Bront Legacy

Description - Aunt Branwell and the Bront Legacy by Nick Holland

Elizabeth Branwell was born in Penzance in 1770, a member of a large and influential Cornish family of merchants and property owners. In 1821 her life changed forever when her sister Maria fell dangerously ill. Leaving her comfortable life behind, Elizabeth made the long journey north to a remote moorland village in Yorkshire to nurse her sister. After the death of Maria, Elizabeth assumed the role of second mother to her nephew and five nieces. She would never see Cornwall again, but instead dedicated her life to her new family: the Brontes of Haworth, to whom she was known as Aunt Branwell. In this first ever biography of Elizabeth Branwell, we see at last the huge impact she had on Charlotte, Emily and Anne Bronte, as well as on her nephew Branwell Bronte who spiralled out of control away from her calming influence. It was a legacy in Aunt Branwell's will that led directly to the Bronte books we love today, but her influence on their lives and characters was equally important. As opposed to the stern aunt portrayed by Mrs. Gaskell in her biography of Charlotte Bronte, we find a kind hearted woman who sacrificed everything for the children she came to love. This revealing book also looks at the Branwell family, and how their misfortunes mirrored that of the Brontes, and we find out what happened to the Bronte cousin who emigrated to America, and in doing so uncover the closest living relatives to the Bronte sisters today. AUTHOR: Nick Holland was born in Barnsley, South Yorkshire in 1971. He is a member of the Bronte Society and an acclaimed non-fiction writer. His recent biography of Anne Bronte was praised by the critics, with the Mail On Sunday calling it 'an excellent book full of passion and pathos'. Nick has also written a biography of Emily Bronte, and in 2016 he became the first author to do a book signing at the Bronte Parsonage Museum in Haworth. 16 b/w images

» Have you read this book? We'd like to know what you think about it - write a review about Aunt Branwell and the Bront Legacy book by Nick Holland and you'll earn 50c in Boomerang Bucks loyalty dollars (you must be a Boomerang Books Account Holder - it's free to sign up and there are great benefits!)


A Preview for this title is currently not available.
More Books By Nick Holland
View All