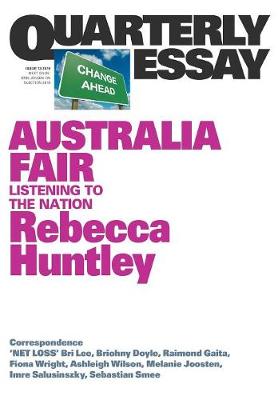 Rebecca Huntley looks at the state of the nation and asks- what does social-democratic Australia want, and why?

What do Australians want most from their next government? In this vivid, grounded, surprising essay, Rebecca Huntley listens to the people and hears a call for change.

Too often we focus on the angry, reactionary minority. But, Huntley shows, there is also a large progressive centre. For some time, a clear majority have been saying they want action - on climate and energy, on housing and inequality, on corporate donations and the corruption of democracy. Would a Shorten Labor government rise to this challenge? What can be learnt from the failures of past governments? Was marriage equality just the beginning? In Australia Fair, Rebecca Huntley reveals the state of the nation and makes the case for democratic renewal - should the next government
heed the call.

"Often the claim is made that our politics and politicians are poll-driven. This is, on the whole, bunkum. If polls were influential, we would have invested much more in renewable energy, maintained and even increased funding to the ABC, and made child care cheaper. We may already have made changes to
negative gearing and moved towards adopting elements of the Uluru Statement from the Heart. We would have taken up the first iteration of the Gonski education reforms. These are some of the issues where a democratic majority comes together, a basic agreement crossing party lines."-Rebecca
Huntley, Australia Fair

» Have you read this book? We'd like to know what you think about it - write a review about Australia Fair: Listening to the Nation: Quarterly Essay 73 book by Rebecca Huntley and you'll earn 50c in Boomerang Bucks loyalty dollars (you must be a Boomerang Books Account Holder - it's free to sign up and there are great benefits!)