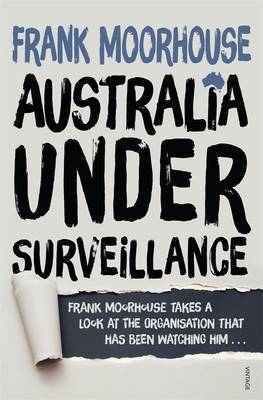 ASIO has kept a file on Frank Moorhouse since he was seventeen. Now Frank has decided it is time to report on ASIO.

This year ASIO has extended its surveillance powers, made the issuing of warrants easier and limited the freedom of journalists. At a time when the government has raised the terrorist alert level to 'high' we are facing the question of what degree of terrorist threat we are prepared to endure so as to retain freedoms of expression and what might loosely be called the 'traditional privacies'.

The paradox is an old one- is a secret agency needed for our safety as a democracy? If so, how does a democracy manage a secret agency without losing control of it? What constitutes an offence against national security? And what are we to make of WikiLeaks and socially conscious hackers and whistleblowers?
Do we need a renewal of the bargain between the citizen and the secret agencies, as unreliable as it may be, as we all go into the glare and the maze of controlled and uncontrollable data collection and its consequences?We are entering a new era, where nothing can be assumed to be private, especially at the governmental level.

More than ever before, our future is unforeseeable, but if in the unforeseeable we see a glimmer of dangerous things, perhaps we should remember that positive things can also be unforeseeable.

» Have you read this book? We'd like to know what you think about it - write a review about Australia Under Surveillance book by Frank Moorhouse and you'll earn 50c in Boomerang Bucks loyalty dollars (you must be a Boomerang Books Account Holder - it's free to sign up and there are great benefits!)

Frank Moorhouse is best known for his award-winning Edith Trilogy the novels Grand Days, Dark Palace, and Cold Light -- which has as its background the League of Nations and the rise of international organisation seen through the experiences of a young Australian woman Edith Campbell Berry. Frank Moorhouse has also participated in public discourse, publishing essays in journals in Australia and overseas, including his essay The Writer in a Time of Terror published in the Griffith Review, which won a Walkley Award, the Alfred Deakin award for an essay contributing to public debate, and the PEN Freedom Award. While writing Australia Under Surveillance he held the position of Senior Fellow at the Griffith University s Centre for Excellence in Policing and Security. AustraliaUnder Surveillance was informed by an interview he had with the former Director-General of Security, David Irvine. He has been a Guest Scholar at the Woodrow Wilson Center in Washington DC, Colonel Johnson Fellow at the History Department of the University of Sydney, and a writer-in-residence at King s College Cambridge. In 2014 the University of Sydney conferred o