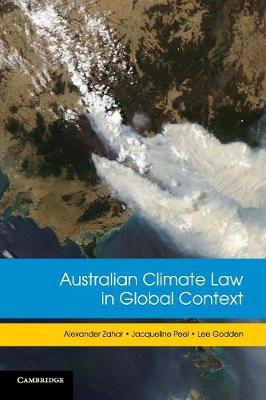 Australian Climate Law in Global Context is a comprehensive guide to current climate change law in Australia and internationally. It includes discussion of: emission trading schemes and carbon pricing laws, laws on renewable energy, biosequestration, carbon capture and storage and energy efficiency; the trading of emission offsets between developed and developing countries, the new international scheme for the protection of forests (REDD) and the transfer of green finance and technology from developed to developing states, the adaptation to climate change through legal frameworks. It assesses the international climate change regime from a legal perspective, focusing on Australia's unique circumstances and its domestic implementation of climate-related treaties. It considers how the challenge of climate change should be integrated into broader environmental law and management. It is a valuable resource for students in law and environmental science, for current and future legal practitioners and for policy-makers and those in the commercial sector.

» Have you read this book? We'd like to know what you think about it - write a review about Australian Climate Law in Global Context book by Alexander Zahar and you'll earn 50c in Boomerang Bucks loyalty dollars (you must be a Boomerang Books Account Holder - it's free to sign up and there are great benefits!)

Alexander Zahar grew up in Athens, Greece. He completed his undergraduate studies, in Philosophy, in New Zealand, and his PhD, in Philosophy of Science, at University College London while on a British Council Commonwealth Scholarship. In Sydney, he worked at the Legal Aid Commission and the Department of Juvenile Justice, during which time he completed his LLB. He joined the United Nations as a lawyer, first at the International Criminal Tribunal for Rwanda, and from 2003 to 2007 at the International Criminal Tribunal for the Former Yugoslavia. From 2008 to 2010 he was Lecturer in Law at Griffith Law School. He joined Macquarie Law School as a Senior Lecturer in 2011. Jacqueline Peel is an Associate Professor at the Melbourne Law School. She holds the degrees of Bachelor of Science and Bachelor of Laws (Hon I) from the University of Queensland, a Master of Laws from New York University where she was a Fulbright scholar, and a PhD from the University of Melbourne. In 2003-2004, Jacqueline returned to NYU Law School as a Hauser Research Scholar and Emile Noel Fellow. Prior to her appointment at Melbourne, Jacqueline completed an internship at the United Nations International Law Commission, working with Professor James Crawford on the ILC's State responsibility articles. From 1997 to 1999 she practised environmental and planning law at the national law firm of Allens Arthur Robinson. Professor Lee Godden researches and teaches within the Melbourne Law School. She is the Director of the Centre for Resources, Energy and Environmental Law within the Law School. Prior to that position she held an appointment as Director of the Office for Environmental Programs.

A Preview for this title is currently not available.
More Books By Alexander Zahar
View All

Legacy of the International Criminal Tribunal for the Former Yugoslavia
$332.06 $368.95