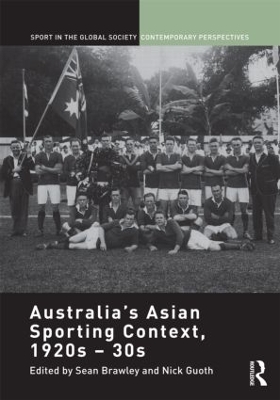 This book examines Australia's sporting relationships with the Asian region during the interwar period. Until now, Australia's sporting relationships with the Asian region have been neglected by scholars of Australian and Asian sports history, and the broader field of Australia's Asian context. Concentrating on the period of the 1920s and 1930s -- when sporting relationships between Australia and a number of Asian nations emerged in a variety of sports -- this book demonstrates the depth of these previously under-examined connections. The book challenges, and complicates, the broader historiography of Australia's Asian context; a historiography that has been strongly influenced by the White Australia Policy and the Pacific War. Why, for example, did White Australia so warmly welcome visiting Japanese sportsmen at a time when the Pacific region appeared to be inexorably sliding into a war that was informed by racial antagonisms? This book examines sporting relations between Australia and seven Asian countries (China, Japan, India, Netherlands East Indies, Philippines, Malaya and Singapore) and a range of sports including rugby, football, swimming, hockey, boxing, cricket and tennis.
The significance of the collection is drawn together in a concluding chapter by prominent historian David Walker. This book was published as a special issue of Sport in Society. » Have you read this book? We'd like to know what you think about it - write a review about Australia's Asian Sporting Context, 1920s - 30s book by Sean Brawley and you'll earn 50c in Boomerang Bucks loyalty dollars (you must be a Boomerang Books Account Holder - it's free to sign up and there are great benefits!)

Sean Brawley is Associate Professor of History and Faculty Teaching and Learning Fellow at the University of New South Wales, Australia. He is the author of The Bondi Lifesaver: History of an Australian Icon; Fighting Words: Competing Voices of the Pacific War) and editor of Doomed to Repeat: Terrorism and the Lessons of History. Nick Guoth is a Visiting Fellow in the College of Arts and Social Sciences at the Australian National University.

A Preview for this title is currently not available.
More Books By Sean Brawley
View All