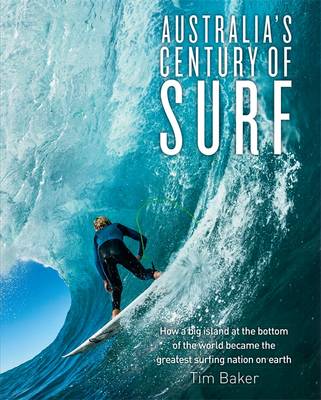 How a big island at the bottom of the world became the greatest surfing nation on earth.In 100 years, surfing in Australia has morphed from exotic Pacific Island curio to regimented training for life savers, from counter culture revolution to respectable mainstream sport. Along the way, it has shaped our coastal migrations, spawned vast business empires and design innovations, produced sports stars and spectacular casualties in equal measure, helped the beach overtake the bush as our national, natural habitat of choice. No other sport has been through such profound cultural shifts or had such far-reaching influence on our national identity. Australia?s Century of Surf marks the centenary of the great Hawaiian Olympic swimmer and surfer Duke Kahanamoku?s historic visit to Australia in 1914. Duke was not the first to ride a surfboard in Australia, just one of the historical misnomers uncovered in this comprehensive and insightful text. But Duke?s historic surfboard riding displays in the summer of 1914/15 set in motion a great wave of oceanic obsession that continues to this day. The story of Australian surfing is largely one of schisms - between freedom seeking beach-goers and censorial puritans, between the quasi-militaristic regiments and volunteerism of surf life savers and the selfish pleasure-seeking pursuits of board riders, the generational and attitudinal gulf between longboarders and shortboarders, professionals and so-called "soul" surfers, territorial tensions between locals and tourists. Many of our most dramatic cultural conflicts have been played out on the nation?s beaches - from the pitched battles between rockers and surfers in the '60s, to the teen gender politics of Puberty Blues and the racial clashes of the Cronulla riots.

» Have you read this book? We'd like to know what you think about it - write a review about Australia's Century of Surf book by Tim Baker and you'll earn 50c in Boomerang Bucks loyalty dollars (you must be a Boomerang Books Account Holder - it's free to sign up and there are great benefits!)

Tim Baker is the bestselling author of Bustin' Down The Door, High Surf, Occy- The Rise and Fall and Rise of Mark Occhiluipo and Surf For Your Life with Mick Fanning. He also edited the anthology Waves- Great Stories from the Surf. He has twice won the Surfing Hall of Fame culture award. He is a former editor of Tracks and Surfing Life magazines. He lives in Currumbin, Qld.

A Preview for this title is currently not available.
More Books By Tim Baker
View All