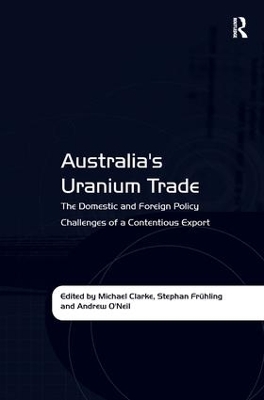 The Domestic and Foreign Policy Challenges of a Contentious Export

Australia's Uranium Trade explores why the export of uranium remains a highly controversial issue in Australia and how this affects Australia's engagement with the strategic, regime and market realms of international nuclear affairs. The book focuses on the key challenges facing Australian policy makers in a twenty-first century context where civilian nuclear energy consumption is expanding significantly while at the same time the international nuclear nonproliferation regime is subject to increasing, and unprecedented, pressures. By focusing on Australia as a prominent case study, the book is concerned with how a traditionally strong supporter of the international nuclear nonproliferation regime is attempting to recalibrate its interest in maximizing the economic and diplomatic benefits of increased uranium exports during a period of flux in the strategic, regime and market realms of nuclear affairs. Australia's Uranium Trade provides broader lessons for how - indeed whether - nuclear suppliers worldwide are adapting to the changing nuclear environment internationally.

» Have you read this book? We'd like to know what you think about it - write a review about Australia's Uranium Trade book by Stephan Fruhling and you'll earn 50c in Boomerang Bucks loyalty dollars (you must be a Boomerang Books Account Holder - it's free to sign up and there are great benefits!)

A Preview for this title is currently not available.
More Books By Stephan Fruhling
View All

After American Primacy: Imagining the Future of Australia's Defence
$41.99 $49.99