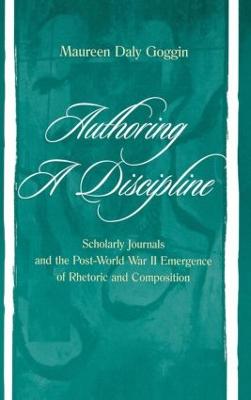 Authoring a Discipline traces the post-World War II emergence of rhetoric and composition as a discipline within departments of English in institutions of higher education in the United States. Goggin brings to light both the evolution of this discipline and many of the key individuals involved in its development. Drawing on archival and oral evidence, this history offers a comprehensive and systematic investigation of scholarly journals, the editors who directed them, and the authors who contributed to them, demonstrating the influence that publications and participants have had in the emergence of rhetoric and composition as an independent field of study.

Goggin considers the complex struggles in which scholars and teachers engaged to stake ground and to construct a professional and disciplinary identity. She identifies major debates and controversies that ignited as the discipline emerged and analyzes how the editors and contributors to the major scholarly journals helped to shape, and in turn were shaped by, the field of rhetoric and composition. She also coins a new term--discipliniographer--to describe those who write the field through authoring and authorizing work, thus creating the social and political contexts in which the discipline emerged. The research presented here demonstrates clearly how disciplines are social products, born of political struggles for both intellectual and material spaces.

» Have you read this book? We'd like to know what you think about it - write a review about Authoring a Discipline book by Maureen Daly Goggin and you'll earn 50c in Boomerang Bucks loyalty dollars (you must be a Boomerang Books Account Holder - it's free to sign up and there are great benefits!)


A Preview for this title is currently not available.
More Books By Maureen Daly Goggin
View All