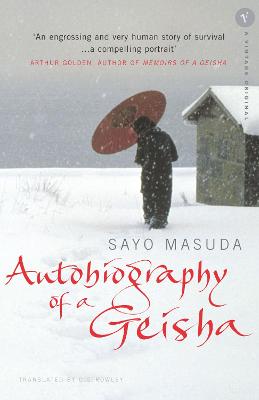 Autobiography Of A Geisha

Description - Autobiography Of A Geisha by Sayo Masuda

Sayo Masuda's story is an extraordinary portrait of rural life in Japan and an illunimating contrast to the fictionalised lives of glamorous geishas. At the age of six masuda's poverty-stricken family sent her to work as a nursemaid. At the age of twelve, she was indentured to a geisha house. In Autobiography of the Geisha, Masuda chrinicles a harsh world in which young women faced the realities of e=sex for sale and wre deprived of their freedom and identity. She also tells of her life after leaving the geisha house, painting a vivid panaorama of the grinding poverty of rurla life in wartime Japan. Many years later Masuda decided to tell her story. Although she could barely read or write she was determined to tell the truth abouth life as a geisha and explode the myths surrounding their secret world. Remarkable frank and incredibly moving, this is the record of one woman's survival on the margins of japanese society.

Other Editions - Autobiography Of A Geisha by Sayo Masuda 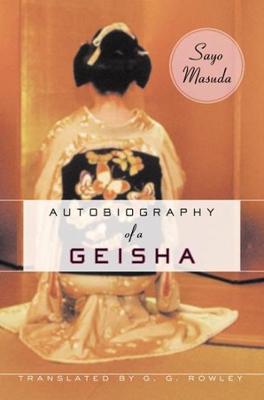 Book Reviews - Autobiography Of A Geisha by Sayo Masuda

» Have you read this book? We'd like to know what you think about it - write a review about Autobiography Of A Geisha book by Sayo Masuda and you'll earn 50c in Boomerang Bucks loyalty dollars (you must be a Boomerang Books Account Holder - it's free to sign up and there are great benefits!)

Sayo Masuda died in 2008. The translator G. G. Rowley teaches English and Japanese literature at Waseda University in Tokyo. She is the author of Yosano Akiko and The Tale of Genji.