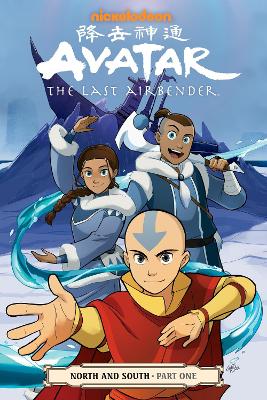 When Aang leaves to aid Zuko with the Kemurikage, Katara and Sokka return to the Southern Water Tribe by themselves. Katara is shocked to find that her beloved village has become a bustling city, with none other than their father, Hakoda, in charge! A Northerner named Malina seems to be behind this change, pushing the North and South to be more unified...but what are her true goals?

Written and drawn by the creative team behind the best-selling The Search, The Rift, and Smoke and Shadow, Gene Luen Yang and Gurihiru, in collaboration with Avatar- The Last Airbender and Legend of Korra creators Michael Dante DiMartino and Bryan Konietzko, this is the ultimate continuation of Avatar and the perfect companion to Legend of Korra!

» Have you read this book? We'd like to know what you think about it - write a review about Avatar: The Last Airbender - North & South Part One book by Gene Luen Yang and you'll earn 50c in Boomerang Bucks loyalty dollars (you must be a Boomerang Books Account Holder - it's free to sign up and there are great benefits!)

Gene Luen Yang began making comic books in the fifth grade. He has since written and drawn a number of titles. His 2006 book, American Born Chinese, was the first graphic novel to be nominated for a National Book Award and the first to win the American Library Association's Michael L. Printz Award. It also won an Eisner Award for Best Graphic Album - New. His 2013 two-volume graphic novel, Boxers & Saints, was nominated for both the National Book Award and the LA Times Book Award. Gene currently writes the graphic novel continuation of the popular Nickelodeon cartoon, Avatar- The Last Airbender. The Shadow Hero, his comic book series with Sonny Liew, revived the Green Turtle, an obscure 1940s character who is arguably the first Asian American superhero. The Shadow Hero is now available as individual digital issues via Amazon Kindle.