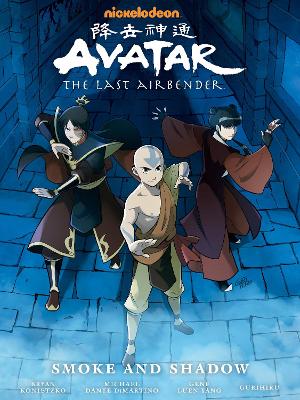 The Fire Nation is threatened by a prophecy told by the Kemurikage--mysterious figures thought only to exist in legend- "remove Zuko from the throne or the country will perish!" Unrest is brewing as the New Ozai Society prepares to make its move against the crown, and children begin to go missing from their homes under mysterious circumstances! Avatar Aang and his friends are doing everything in their power to save them--but will it be enough?!

This special, oversized edition of Smoke and Shadow features volumes 1-3 with annotations by writer Gene Luen Yang and artists Gurihiru, as well as a sketchbook section with new, behind-the-scenes material!

» Have you read this book? We'd like to know what you think about it - write a review about Avatar: The Last Airbender - Smoke And Shadow Library Edition book by Gene Luen Yang and you'll earn 50c in Boomerang Bucks loyalty dollars (you must be a Boomerang Books Account Holder - it's free to sign up and there are great benefits!)

Gene Luen Yang began making comic books in the fifth grade. He has since written and drawn a number of titles. His 2006 book, American Born Chinese, was the first graphic novel to be nominated for a National Book Award and the first to win the American Library Association's Michael L. Printz Award. It also won an Eisner Award for Best Graphic Album - New. His 2013 two-volume graphic novel, Boxers & Saints, was nominated for both the National Book Award and the LA Times Book Award. Gene currently writes the graphic novel continuation of the popular Nickelodeon cartoon, Avatar- The Last Airbender. The Shadow Hero, his comic book series with Sonny Liew, revived the Green Turtle, an obscure 1940s character who is arguably the first Asian American superhero. The Shadow Hero is now available as individual digital issues via Amazon Kindle.