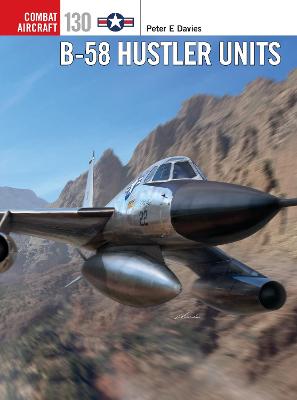 One of the most dramatic bombers of its day, the Convair B-58 came to epitomise the Cold War power of Strategic Air Command. Introduced only 12 years after the sound barrier was first broken, this iconic plane became the first large long-range supersonic bomber to take to the skies, a feat which had seemed far-fetched only a few years previously. Outstripping its contemporaries in terms of speed, and agile enough to escape most interceptors, the B-58 was a remarkable feat of engineering, setting 19 world speed records and collecting a host of trophies. The first operational bomber capable of Mach 2 at 63,000 feet, it was able to evade hostile fighters and represented a serious threat to targets across the Soviet Bloc.
Supported by contemporary first-hand accounts, photography, and full-colour illustrations, this study explores the history of this ground-breaking aircraft from its conception to its little-known testing for use in the Vietnam War.

» Have you read this book? We'd like to know what you think about it - write a review about B-58 Hustler Units book by Peter E. Davies and you'll earn 50c in Boomerang Bucks loyalty dollars (you must be a Boomerang Books Account Holder - it's free to sign up and there are great benefits!)