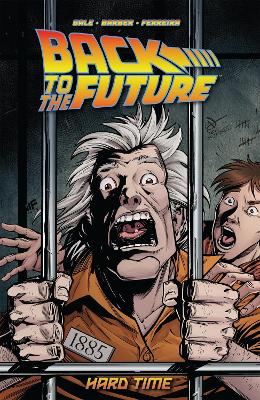 Back To the Future: Hard Time

Description - Back To the Future: Hard Time by Bob Gale

Co-creator Bob Gale takes his most famous creations through new comic book adventures that expand the universe created by the blockbuster films!

The secrets of Jailbird Joey threaten Marty and Doc-what did Uncle Joey do in the past that was so bad... and what does that mean for Marty in the present day of 1986? You can bet your bottom dollar that Doc Brown has a theory! Collects issues #18-21.

Book Reviews - Back To the Future: Hard Time by Bob Gale

» Have you read this book? We'd like to know what you think about it - write a review about Back To the Future: Hard Time book by Bob Gale and you'll earn 50c in Boomerang Bucks loyalty dollars (you must be a Boomerang Books Account Holder - it's free to sign up and there are great benefits!)

Michael Robert "Bob" Gale is an American screenwriter, producer and film director. He famously co-wrote the science fiction film Back to the Future with writing partner Robert Zemeckis, and the screenplays for the film's two sequels. Gale also co-produced all three films, and served as associate producer on the subsequent animated TV series. Gale has also written for comics, including Marvel Comics' Ant-Man's Big Christmas and DC Comics' Batman. In 2001, Gale had a short run on Marvel Comics' Daredevil, writing issues #20-25 of Volume 2. Working with artists Phil Winslade and David Ross, they created the story arc "Playing to the Camera." Writer-painter David Mack contributed covers to the run. In 2008 Gale worked as one of the writers among the rotating writer/artist teams on The Amazing Spider-Man, which at the time, was published three times a month. John Barber is a former Marvel and IDW Publishing editor now focused on writing comics. Credits include- Optimus Prime, Doctor Strange/Punisher, Ultimate Spider-Man Infinite Comics, Revolutionaries, Back to the Future, and Action Man comics!

A Preview for this title is currently not available.
More Books By Bob Gale
View All