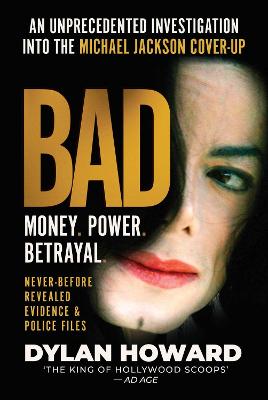 Bad: An Unprecedented Investigation into the Michael Jackson Cover-Up

Description - Bad: An Unprecedented Investigation into the Michael Jackson Cover-Up by Dylan Howard

An Inside View into the Dark Side of a Music Icon

He was the King of Pop, a superstar without equal, the idol of millions of young people around the world. But was Michael Jackson also a sexual predator without equal, someone who preyed on the very fans who adored him?

In the wake of the controversial two-part documentary Leaving Neverland, which told the stories of two young boys who were befriended by the singer and have claimed they suffered years of agonising abuse, Dylan Howard set out to investigate Jackson's life and death in unprecedented depth, to determine - as one lawyer suggested - that the pop star ran 'the most sophisticated child sexual abuse procurement and facilitation operation the world has known.'

After all the highly publicized trials and unfounded accusations, stunning new information has finally come to light: irrefutable evidence that one of the best-known, best-loved figures in the world was a monster behind closed doors-a foul-mouthed, abusive, drug-sodden freak whose deeds and the reasons for those deeds are revealed now for the first time.

A dramatic narrative account based on dozens of interviews, Howard shares Jackson's own riveting personal journal - obtained exclusively for this book - interviews with family members, multiple first-person sources - some of whom have asked to remain anonymous-as well as thousands of pages of court documents. What he uncovers is a man who was both naive and Machiavellian, unorthodox, a devoted father, shrewd businessman, and drug addict whose life was cut short but whose sound and style have influenced artists of various genres and generations.

Remarkably though, in death, there remains two portraits of Michael Jackson: the reigning King of Pop, and a pedophile whose pattern of abuse ruined his reputation. Fans and individuals alike will forever be asking if the insidious claims being made about MJ are true. This is the new narrative and the sad legacy of one of the best-selling music artists of all time.

Here is his life story, told for the first time with stories and testimony that will leave you shaken.

» Have you read this book? We'd like to know what you think about it - write a review about Bad: An Unprecedented Investigation into the Michael Jackson Cover-Up book by Dylan Howard and you'll earn 50c in Boomerang Bucks loyalty dollars (you must be a Boomerang Books Account Holder - it's free to sign up and there are great benefits!)


A Preview for this title is currently not available.
More Books By Dylan Howard
View All

Epstein, Inc.: How the US Government Helped Make Spying, Sex Trafficking, and Blackmail Big Business
Not Yet Published
$35.99 $39.99

Billion Dollar Hollywood Heist: The A-List Kingpin and the Poker Ring that Brought Down Tinseltown
Available, ships in 7-10 business days
$29.74 $34.99

Dirty Sexy Money: The Unauthorized Biography of Kris Jenner
Not Yet Published
$44.99 $49.99