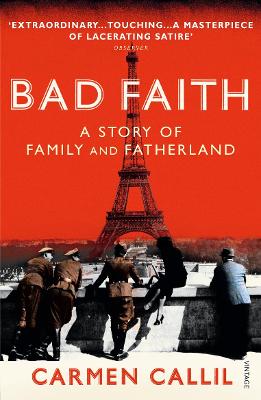 A History of Family and Fatherland

The story of one of history's most despicable villians told by a brilliant author - shortlisted for the Samuel Johnson Prize.

Bad Faith tells the story of one of history's most despicable villains and conmen - Louis Darquier, Nazi collaborator and 'Commissioner for Jewish Affairs', who dissembled his way to power in the Vichy government and was responsible for sending thousands of children to the gas chambers. After the war he left France, never to be brought to justice.

Early on in his career Louis married the alcoholic Myrtle Jones from Tasmania, equally practised in the arts of fantasy and deception, and together they had a child, Anne whom they abandoned in England. Her tragic story is woven through the narrative.

In Carmen Callil's masterful, elegiac and sometimes darkly comic account, Darquier's rise during the years leading up to the Second World War mirrors the rise of French anti-Semitism. Epic, haunting, the product of extraordinary research, this is a study in powerlessness, hatred and the role of remembrance.

Shortlisted for the Samuel Johnson Prize. 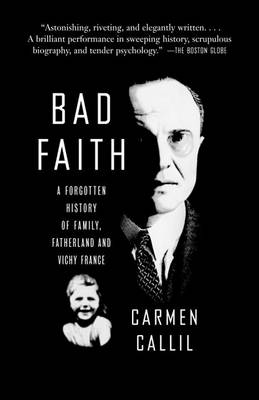 » Have you read this book? We'd like to know what you think about it - write a review about Bad Faith book by Carmen Callil and you'll earn 50c in Boomerang Bucks loyalty dollars (you must be a Boomerang Books Account Holder - it's free to sign up and there are great benefits!)

Carmen Callil was born and educated in Melbourne, Australia, and came to the UK in 1960. In 1972 she founded Virago and ten years later became Managing Director of Chatto & Windus. In 1994 she was awarded honorary doctorates by the universities of Sheffield, York, Oxford Brookes and The Open University. In 1996 she chaired the judging panel of the Booker Prize. She is the author (with Colm Toibin) of The Modern Library- The 200 Best Novels in English since 1950. She lives in London.

A Preview for this title is currently not available.
More Books By Carmen Callil
View All