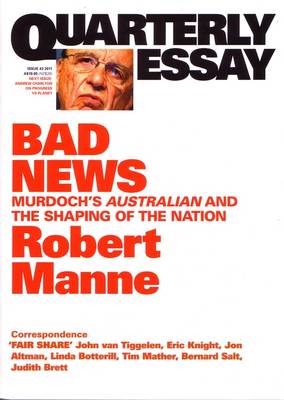 Bad News: Murdoch's Australian And The Shaping Of The Nation: Quarterly Essay 43

Description - Bad News: Murdoch's Australian And The Shaping Of The Nation: Quarterly Essay 43 by Robert Manne

But what about in Australia, where he owns 70 per cent of the press? In Bad News, Robert Manne investigates Murdoch's lead political voice here, the Australian newspaper, and how it shapes debate.

Since 2002, under the editorship of Chris Mitchell, the Australian has come to see itself as judge, jury and would-be executioner of leaders and policies. Is this a dangerous case of power without responsibility? In a series of devastating case studies, Manne examines the paper's campaigns against the Rudd government and more recently the Greens, its climate coverage and its ruthless pursuit of its enemies and critics. Manne also considers the standards of the paper and its influence more generally. This brilliant essay is part deep analysis and part vivid portrait of what happens when a newspaper goes rouge.

'The Australian sees itself not as a mere newspaper, but as a player in the game of national politics, calling upon the vast resources of the Murdoch empire and the millions of words it has available to it to try to make and unmake governments.' Robert Manne, Bad News

» Have you read this book? We'd like to know what you think about it - write a review about Bad News: Murdoch's Australian And The Shaping Of The Nation: Quarterly Essay 43 book by Robert Manne and you'll earn 50c in Boomerang Bucks loyalty dollars (you must be a Boomerang Books Account Holder - it's free to sign up and there are great benefits!)