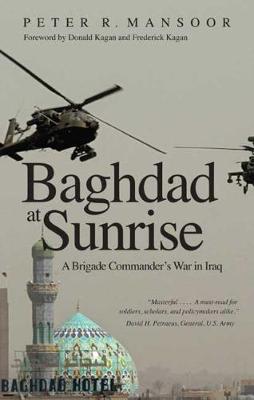 A Brigade Commander's War in Iraq

This compelling book presents an unparalleled record of what happened after U.S. forces seized Baghdad in the spring of 2003. Army Colonel Peter R. Mansoor, the on-the-ground commander of the 1st Brigade, 1st Armored Division-the "Ready First Combat Team"-describes his brigade's first year in Iraq, from the sweltering, chaotic summer after the Ba'athists' defeat to the transfer of sovereignty to an interim Iraqi government a year later. Uniquely positioned to observe, record, and assess the events of that fateful year, Mansoor now explains what went right and wrong as the U.S. military confronted an insurgency of unexpected strength and tenacity.

Drawing not only on his own daily combat journal but also on observations by embedded reporters, news reports, combat logs, archived e-mails, and many other sources, Mansoor offers a contemporary record of the valor, motivations, and resolve of the 1st Brigade and its attachments during Operation Iraqi Freedom. Yet this book has a deeper significance than a personal memoir or unit history. Baghdad at Sunrise provides a detailed, nuanced analysis of U.S. counterinsurgency operations in Iraq, and along with it critically important lessons for America's military and political leaders of the twenty-first century.

» Have you read this book? We'd like to know what you think about it - write a review about Baghdad at Sunrise book by Peter R. Mansoor and you'll earn 50c in Boomerang Bucks loyalty dollars (you must be a Boomerang Books Account Holder - it's free to sign up and there are great benefits!)

Peter R. Mansoor is the General Raymond Mason Chair of Military History, Ohio State University. A recently retired U.S. Army colonel, he served as executive officer to Commanding General David H. Petraeus, Multi-National Force-Iraq (2007-8); as a member of the Joint Chiefs of Staff Strategy Group that proposed the surge strategy in Iraq (2006); as founding director of the U.S. Army/Marine Corps Counterinsurgency Center (2006); and as Commander of the 1st Brigade Combat Team, 1st Armored Division, in Baghdad (2003-4). He lives in Columbus, OH.

A Preview for this title is currently not available.
More Books By Peter R. Mansoor
View All