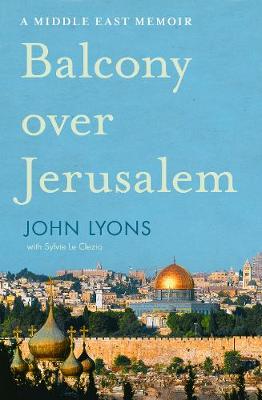 A gripping memoir of life in Jerusalem from one of Australia's most experienced Middle East correspondents.

Leading Australian journalist John Lyons will take readers on a fascinating personal journey through the wonders and dangers of the Middle East. From the sheer excitement of arriving in Jerusalem with his wife and eight-year-old son, to the fall of dictators and his gripping account of what it feels like to be taken by Egyptian soldiers, blindfolded and interrogated, this is a memoir of the Middle East like no other.

Drawing on a 20-year interest in the Middle East, Lyons has had extraordinary access - he's interviewed everyone from Israel's former Prime Ministers Shimon Peres and Ehud Olmert to key figures from Hezbollah and Hamas. He's witnessed the brutal Iranian Revolutionary Guard up close and was one of the last foreign journalists in Iran during the violent crackdown against the 'Green Revolution'. He's confronted Hamas officials about why they fire rockets into Israel and Israeli soldiers about why they fire tear gas at Palestinian school children. By telling the story of his family travelling through the region, this book is extremely readable and entertaining, full of humour, colour. It is sometimes dazzling in its detail, sometimes tragic. Lyons says he has written it in a way that readers can feel they are there with him - so they can smell the wonderful markets of the Middle East and feel the fear of what it is like to be blindfolded and have your hands bound with electrical cord. Lyons also looks at 50 years of Israeli occupation of the West Bank - the mechanics of how this works and the effect it now has on both Israelis and Palestinians.

Lyons explains the Middle East through every day life and experiences - his son's school, his wife's friends and his own dealings with a range of people over six years. If you only read one book on the Middle East, this is it.

» Have you read this book? We'd like to know what you think about it - write a review about Balcony Over Jerusalem book by John Lyons and you'll earn 50c in Boomerang Bucks loyalty dollars (you must be a Boomerang Books Account Holder - it's free to sign up and there are great benefits!)

John Lyons is one of Australia's leading journalists. A three-time Walkley winner, John is currently Associate Editor (Digital Content) at The Australian. For six years he was The Australian's Middle East correspondent, based in Jerusalem with his wife, Sylvie Le Clezio, and son, Jack. He is a former editor, and New York correspondent, of The Sydney Morning Herald and Washington correspondent for The Australian. While in Jerusalem he and Sylvie won three United Nations Human Rights Awards, and a Walkley for their contribution to 'Stone Cold Justice', a special investigative report for ABC TV's Four Corners on the children of the West Bank. John has also won the Graham Perkin Award for the Australian Journalist of the Year.

A Prevention of the Plague. Being a Discovery of a Method to Hinder It's Propogation, by Destroying the Pestiferous Atoms ... by John Lyons, Esq.
$32.51 $36.12