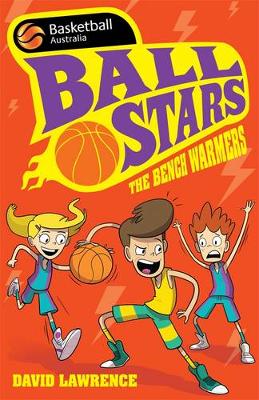 Meet the Bench Warmers - Danny, Crystal, Angie, Omyr, Leanne and Cody. They're the new basketball players at Robdale Primary and according to hot shot Greg 'The Goat' McGriffin, they don't have a chance of winning a lunchtime game. But when the gang are picked as part of the school squad things start to look up.

Can the newbies shake off their name in the upcoming interschool comp, or will it be just another reminder of where they really belong?

» Have you read this book? We'd like to know what you think about it - write a review about Ball Stars 1 book by David Lawrence and you'll earn 50c in Boomerang Bucks loyalty dollars (you must be a Boomerang Books Account Holder - it's free to sign up and there are great benefits!)

David Lawrence is a comedy writer/performer who accidentally became a children's author in 2008. He has written for numerous TV shows including Hamish & Andy, Comedy Inc., and Talkin' About Your Generation, and is cast member of the ABC3 children's sketch comedy show, You're Skitting Me. His books, Anna Flowers and the three part Fox Swift series, have sporting themes and use humour to tackle issues such as bullying and racism in schools. David still hopes to play AFL football and win a Brownlow Medal ... but at age 51, it's going to be tough.

What Not to Do If You Turn Invisible
Ross Welford
$11.99 $14.99
More Books By David Lawrence
View All