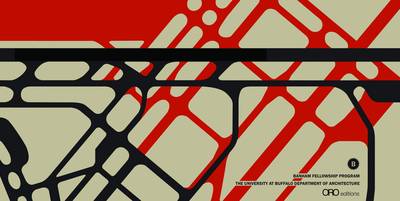 P. Reyner Banham Fellowships at the University at Buffalo School of Architecture

Peter Reyner Banham, the renowned architectural historian and cultural critic, taught in the newly founded architecture program at the State University of New York at Buffalo between 1976 and 1980. During his tenure at Buffalo, inspired by the daylight factories and the grain silos of the region, he conducted research that led to his seminal book, A CONCRETE ATLANTIS, illuminating the relationship between American industrial buildings and European Modern Architecture. The Peter Reyner Banham Fellowship program at Buffalo was established in 2000 to celebrate Banham's legacy at Buffalo, and, most importantly, to project new work that is inspired by Banham's foundational body of scholarship on material and visual culture. Each year, the Banham Fellow engages the students and the faculty of the department through research, creative activity, and teaching, and presents that body of work through an exhibition and a lecture. Here, the projections of the past five Banham Fellows are documented: Jonathan Solomon (2005-2006), Sergio Lopez-Pineiro (2006-2007), Eva Franch-Gilabert (2007-2008), Michael Kubo (2008-2009), Brian Tabolt (2009-2010). This document is a testament to the reach of Banham's visions and to the visionary work of the Fellows at Buffalo. AUTHOR: Professor Mehrdad Hadighi completed his post-professional studies at Cornell University, and holds a professional degree in architecture and a degree in studio art from the University of Maryland. Brian Tabolt received his Master of Architecture from Princeton University and holds a Bachelor of Science in Architecture with High Honors from the University of Virginia, where he was the recipient of the Z Society Edgar J Shannon Award for Design Excellence. Michael Kubo has been appointed as the 2008 Banham Fellow. Michael studied at the University of Massachusetts, where he received his B.A. in Architecture magna cum laude in 2000, and at the Harvard University Graduate School of Design, where he received the M.Arch in 2006, completing his thesis with distinction. Eva Franch Gilabert has been appointed as the 2007 Banham Fellow. Eva studied at TU Delft, at ETS Arquitectura Barcelona where she received her Diploma in Architecture with Honors in 2003 and at Princeton University where she received the Suzanne Kolarik Underwood Prize and her M.Arch II degree in 2007. ILLUSTRATIONS: 120 photographs - 50 illustrations

» Have you read this book? We'd like to know what you think about it - write a review about Banham in Buffalo book by Peter Reyner Banham and you'll earn 50c in Boomerang Bucks loyalty dollars (you must be a Boomerang Books Account Holder - it's free to sign up and there are great benefits!)