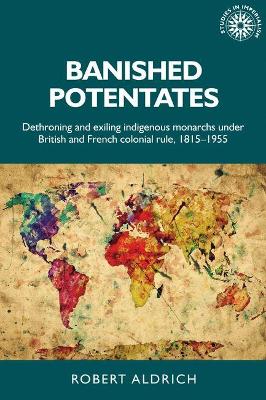 Though the overthrow and exile of Napoleon in 1815 is a familiar episode in modern history, it is not well known that just a few months later, British colonisers toppled and banished the last king in Ceylon. Beginning with that case, this volume examines the deposition and exile of indigenous monarchs by the British and French - with examples in India, Burma, Malaysia, Vietnam, Madagascar, Tunisia and Morocco - from the early nineteenth century down to the eve of decolonisation. It argues that removal of native sovereigns, and sometimes abolition of dynasties, provided a powerful strategy used by colonisers, though European overlords were seldom capable of quelling resistance in the conquered countries, or of effacing the memory of local monarchies and the legacies they left behind. » Have you read this book? We'd like to know what you think about it - write a review about Banished Potentates book by Robert Aldrich and you'll earn 50c in Boomerang Bucks loyalty dollars (you must be a Boomerang Books Account Holder - it's free to sign up and there are great benefits!)

Robert Aldrich is Professor of European History at the University of Sydney -- .