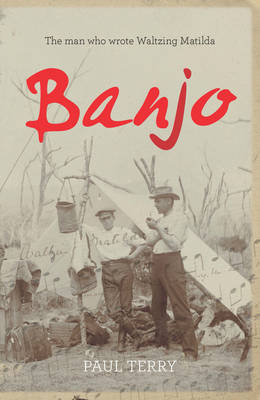 The Story of the Man Who Wrote Waltzing Matilda

In 1886, a nervous young lawyer and aspiring writer met the editor of a radical new paper to discuss the possibility of publishing some poetry. He thought his 'fractured verses' would not stand the test of time. The editor believed otherwise and in the years that followed, Banjo Paterson became Australia's most-loved and influential poet.

In a life that took him from a bush boyhood to the battlefields of South Africa and the turmoil of the Great War, Banjo Paterson rubbed shoulders with the rich and famous. But the heroes of his tales were ordinary folk bushmen, battlers, swaggies and soldiers. He told their stories of humour, tragedy and triumph set against a landscape that is both grindingly harsh and stunningly beautiful, and his words rolled off Australian tongues for generations.

From the political upheaval captured in 'Waltzing Matilda' to the wistful longing for the bush in 'Clancy of the Overflow', Banjo follows the life and inspirations of AB Paterson. We meet the men and women who shaped the young Australian nation as it shook off its convict beginnings to embrace its own place on the world stage and who defined our national character today.

» Have you read this book? We'd like to know what you think about it - write a review about Banjo book by Paul Terry and you'll earn 50c in Boomerang Bucks loyalty dollars (you must be a Boomerang Books Account Holder - it's free to sign up and there are great benefits!)

Paul Terry is a producer with 7 Prime, and has worked as a journalist in radio, television and newspapers in NSW, SA and Tasmania. He is author of the The True Story of Ned Kelly's Last Stand and In Search of Captain Moonlite.

A Preview for this title is currently not available.
More Books By Paul Terry
View All