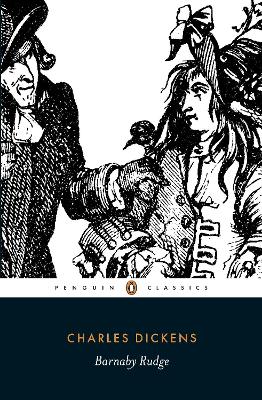 This edition is based on the first one-volume publication of Barnaby Rudge, reproducing all the original illustrations. Appendices include a map of London at the time of the Gordon Riots and the preface to the 1969 edition.
Charles Dickens's Barnaby Rudge is a vivid portrait of London's descent into anarchy, where 'King Mob' rules the streets, and innocent lives are swept up in the chaos. This Penguin Classics edition is edited with an introduction and notes by John Bowen.

Set against the backdrop of the Gordon Riots of 1780, Barnaby Rudge is a story of mystery and suspense which begins with an unsolved double murder and goes on to involve conspiracy, blackmail, abduction and retribution. Through the course of the novel fathers and sons become opposed, apprentices plot against their masters and Protestants clash with Catholics on the streets. And, as London erupts into riot, Barnaby Rudge himself struggles to escape the curse of his own past. With its dramatic descriptions of public violence and private horror, its strange secrets and ghostly doublings, Barnaby Rudge is a powerful, disturbing blend of historical realism and Gothic melodrama.

This edition is based on the one-volume publication of Barnaby Rudge, reproducing all the original illustrations by 'Phiz' and George Cattermole. Appendices include a map of London at the time of the Gordon Riots and the preface to the 1868 edition.

Charles Dickens is one of the best-loved novelists in the English language, whose 200th anniversary was celebrated in 2012. His most famous books, including Oliver Twist, Great Expectations, A Tale of Two Cities, David Copperfield and The Pickwick Papers, have been adapted for stage and screen and read by millions.
If you enjoyed Barnaby Rudge, you might like Dickens's A Tale of Two Cities, also available in Penguin Classics.

'One of Dickens' most neglected, but most rewarding, novels' Peter Ackroyd » Have you read this book? We'd like to know what you think about it - write a review about Barnaby Rudge book by Charles Dickens and you'll earn 50c in Boomerang Bucks loyalty dollars (you must be a Boomerang Books Account Holder - it's free to sign up and there are great benefits!)

Charles Dickens (1812-70) was a political reporter and journalist before establishing his reputation as a novelist with PICKWICK PAPERS (1836-7). His novels captured and held the public imagination over a period of more than thirty years. John Bowen teaches English at the University of Keele. He has written widely on Charles Dickens and is the author of 'Other Dickens: Pickwick to Dombey' (OUP, 2000).