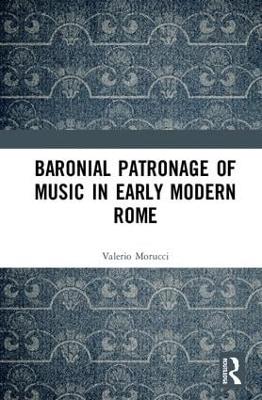 This is the first dedicated study of the musical patronage of Roman baronial families in the sixteenth and early seventeenth centuries. Patronage - the support of a person or institution and their work by a patron - in Renaissance society was the basis of a complex network of familial and political relationships between clients and patrons, whose ideas, values, and norms of behavior were shared with the collective. Bringing to light new archival documentation, this book examines the intricate network of patronage interrelationships in Rome. Unlike other Italian cities where political control was monocentric and exercised by single rulers, sources of patronage in Rome comprised a multiplicity of courts and potential patrons, which included the pope, high prelates, nobles and foreign diplomats. Morucci uses archival records, and the correspondence of the Orsini and Colonna families in particular, to investigate the local activity and circulation of musicians and the cultivation of music within the broader civic network of Roman aristocratic families over the period. The author also shows that the familial union of the Medici and Orsini families established a bidirectional network for artistic exchange outside of the Eternal City, and that the Orsini-Colonna circle represented a musical bridge between Naples, Rome, and Florence.

» Have you read this book? We'd like to know what you think about it - write a review about Baronial Patronage of Music in Early Modern Rome book by Valerio Morucci and you'll earn 50c in Boomerang Bucks loyalty dollars (you must be a Boomerang Books Account Holder - it's free to sign up and there are great benefits!)