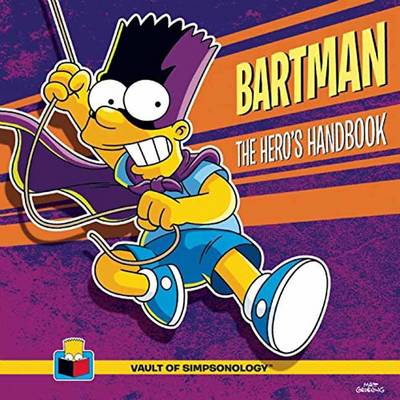 In the sixth volume of the Vault of SimpsonologyTM series, Bart Simpson-as his alter-ego Bartman-gives advice on how to be the ultimate superhero.

An expert of stealth and cunning-especially when it comes to getting out of school-Bartman, the revered superhero and alter-ego of the one and only Bart Simpson, is a master of his craft. Lucky for us, he's also a bit of a braggart, always willing to share his secrets and tricks . . . for the right price. Chock-full of humor, daring advice, and interactive collectibles, Bartman: The Hero's Handbook grants readers the tools needed to take down the evils of society and save the day. Told from the point-of-view of the colossus of costumed calamity himself, this is the ultimate guide for superheroes-in-training eager to take their skills to the next level-and avoid detention.

» Have you read this book? We'd like to know what you think about it - write a review about Bartman: The Hero's Handbook book by Matt Groening and you'll earn 50c in Boomerang Bucks loyalty dollars (you must be a Boomerang Books Account Holder - it's free to sign up and there are great benefits!)

Matt Groening is the creator of the longest-running comedy in television history...The Simpsons. It exploded into a cultural phenomenon in 1990 and has remained one of the most groundbreaking and innovative entertainment franchises, recognizable throughout the world. He followed it with his creation of the hit sci-fi series Futurama, currently one of the top-rated shows on Comedy Central. As a cartoonist, Groening began his "Life in Hell" weekly comic strip series in the 1980s, which he concluded in 2012. He lives in Southern California.

A Preview for this title is currently not available.
More Books By Matt Groening
View All