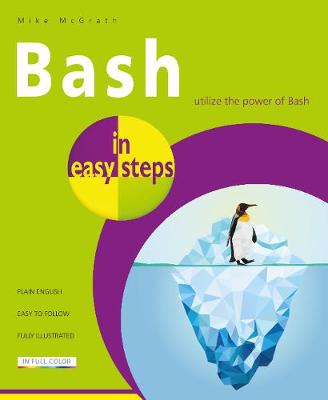 The Bourne Again SHell (Bash) is a powerful command-line shell interface that lets you communicate directly with the kernel at the heart of a computer's operating system for total control. Bash is the default shell for Unix-based operating systems Linux, Mac OS X, and Raspbian on Raspberry Pi devices, and is also available to Windows users on the Windows Subsystem for Linux (WSL).

This book will show you how to use the Bash command-line interface and how to employ Bash's programming abilities. Complete examples illustrate each aspect with colorized source code and full-color screenshots depict the actual output.

Bash in easy steps begins by demonstrating Bash commands for system navigation and file manipulation so you will quickly become familiar with the command-line interface. It explains all the BASH basics before moving on to describe advanced features such as command history, command-line editing, and environment customization. The book then introduces Bash programming with examples of flow control, command switches, input/output, and debugging - allowing you to create your own executable programs by copying the examples.

Bash in easy steps has an easy-to-follow style that will appeal to:

» Have you read this book? We'd like to know what you think about it - write a review about Bash in easy steps book by Mike McGrath and you'll earn 50c in Boomerang Bucks loyalty dollars (you must be a Boomerang Books Account Holder - it's free to sign up and there are great benefits!)


A Preview for this title is currently not available.
More Books By Mike McGrath
View All

You Bet Your Garden Guide to Growing Great Tomatoes, 2nd Edition: How to Grow Great-Tasting Tomatoes in Any Backyard, Garden, or Container
$22.49 $24.99