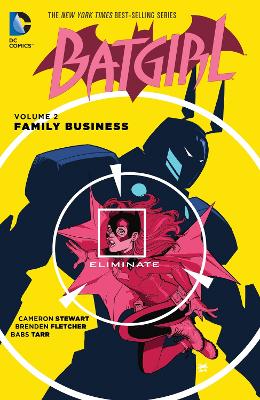 There's a new Batman in town-and that's bad news for Barbara Gordon! She's already got enough upheaval in her life, with her roommate Frankie now in on her biggest secret. And what happens when the evil Livewire joins the fight with the intention of taking out both Batgirl and the mysterious new Batman?

» Have you read this book? We'd like to know what you think about it - write a review about Batgirl TP Vol 2 book by Cameron Stewart and you'll earn 50c in Boomerang Bucks loyalty dollars (you must be a Boomerang Books Account Holder - it's free to sign up and there are great benefits!)

Cameron Stewart is the illustrator of BATMAN AND ROBIN, SEAGUY, SEVEN SOLDIERS- THE MANHATTAN GUARDIAN, THE OTHER SIDE, CATWOMAN and many more. He has been nominated for Shuster, Eagle, Harvey and Eisner Awards, and his original webseries Sin Titulo won the 2010 Eisner and Shuster Awards for Best Digital Comic. He is currently writing BATGIRL for DC Comics. Brenden Fletcher is a Canadian writer, best known for his work at DC Comics. He is currently co-writing the critically acclaimed bestelling series BATGIRL with Cameron Stewart, which has reinvigorated the franchise. Fletcher is also co-writing GOTHAM ACADEMY with Becky Cloonan, as well as the forthcoming BLACK CANARY.