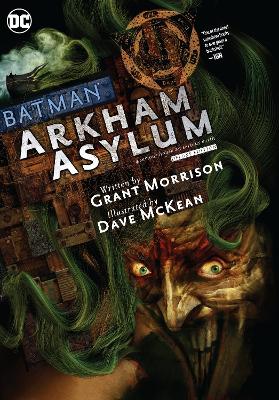 Written by legendary comics creator Grant Morrison and beautifully illustrated by artist Dave McKean, the timeless, genre-bending tale BATMAN- ARKHAM ASYLUM is brought back to its classic beauty in this deluxe hardcover edition!


In 1920, following the death of his disturbed mother, brilliant psychologist Amadeus Arkham began the conversion of his ancestral home into a hospital for the treatment of the mentally ill. More than half a century later, the Arkham Asylum for the Criminally Insane is a place of dismal
corridors and oppressive shadows - a dark riddle in stone and timber, best left unsolved.

Within its claustrophobic walls the demented and deformed enemies of the Batman brood in padded cells and unlit cellars, dreaming of a day when they might rise up and overthrow the world of reason.

That day has finally come.

It is April 1st, and the lunatics have taken over the asylum. Led by the Joker, Arkham's inmates issue a terrible ultimatum to the man responsible for their imprisonment. The Batman must descend into this heart of darkness, confront his greatest foes, and face the truth of his own divided identity - or condemn himself to share their fate.

» Have you read this book? We'd like to know what you think about it - write a review about Batman: Arkham Asylum The Deluxe Edition book by Grant Morrison and you'll earn 50c in Boomerang Bucks loyalty dollars (you must be a Boomerang Books Account Holder - it's free to sign up and there are great benefits!)