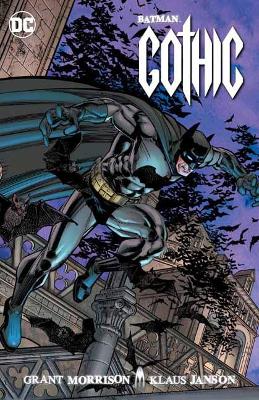 In the intensely chilling BATMAN GOTHIC, the Dark Knight Detective must defeat an immortal killer while dealing with a terrifying horror from Bruce Wayne's youth. While plagued by nightmares about a headmaster from his childhood, Batman investigates the murders of the major crime bosses in Gotham. Discovering the culprit is a serial child killer whom the mafia had drowned years ago, the Dark Knight Detective goes after the mysterious Mr. Whisper. But when Batman confronts the macabre killer he realizes that he is actually the headmaster who used to torment Bruce Wayne as a boy. Encumbered by adolescent fear, the Caped Crusader must find a way to stop this unkillable man from unleashing a lethal plague on Gotham.

Don't miss this new edition of GOTHIC, collecting LEGENDS OF THE DARK KNIGHT #6-10 by Grant Morrison with art by Klaus Janson.

» Have you read this book? We'd like to know what you think about it - write a review about Batman Gothic (New Edition) book by Grant Morrison and you'll earn 50c in Boomerang Bucks loyalty dollars (you must be a Boomerang Books Account Holder - it's free to sign up and there are great benefits!)

Grant Morrison has been working with DC Comics for more than twenty years, beginning with his legendary runs on the revolutionary titles ANIMAL MAN and DOOM PATROL. Since then he has written numerous best-sellers -- including JLA, BATMAN and New X-Men -- as well as the critically acclaimed creator-owned series THE INVISIBLES, SEAGUY, THE FILTH, WE3 and JOE THE BARBARIAN. Morrison has also expanded the borders of the DC Universe in the award-winning pages of SEVEN SOLDIERS, ALL-STAR SUPERMAN, FINAL CRISIS and BATMAN, INC., and he is currently reinventing the Man of Steel in the all-new ACTION COMICS. In his secret identity, Morrison is a "counterculture" spokesperson, a musician, an award-winning playwright and a chaos magician. He is also the author of the New York Times best-seller Supergods, a groundbreaking psycho-historic mapping of the superhero as a cultural organism. He divides his time between his homes in Los Angeles and Scotland.