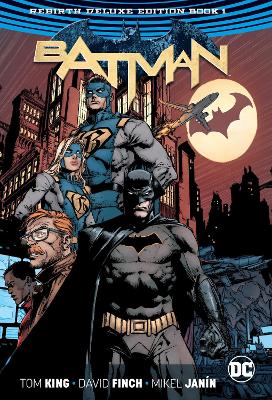 The first two volumes of BATMAN as a part of DC Universe Rebirth are collected here in hardcover for the first time ever!

The Caped Crusader has never been stopped. Not by the Joker. Not by Two-Face. Not even by the entire Justice League. But now, in the wake of DC UNIVERSE- REBIRTH, Batman must face his most challenging foe ever--a hero who wants to save Gotham...from the Batman!

From one of the biggest breakout writers in years and former CIA analyst Tom King (GRAYSON, THE SHERIFF OF BABYLON) and superstar artist David Finch present BATMAN VOL. 1! This collection features the first two paperback volumes of the series, combined to make a deluxe edition graphic novel in hardcover for the first time ever. Collects BATMAN- REBIRTH #1 (co-written by former Bat-scribe Scott Snyder) and BATMAN #1-12.

» Have you read this book? We'd like to know what you think about it - write a review about Batman HC Vol 1 & 2 Deluxe Edition (Rebirth) book by Tom King and you'll earn 50c in Boomerang Bucks loyalty dollars (you must be a Boomerang Books Account Holder - it's free to sign up and there are great benefits!)