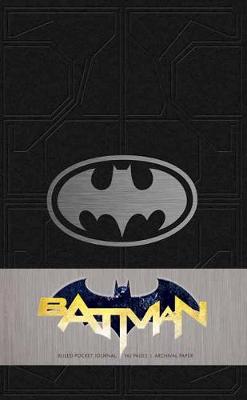 Embroiled in a potentially deadly mission, Batman drops the journal he has been using to jot down notes on the case. That's where you come in! This ruled notebook features an original storyline and several pages of notes and sketches created by Batman, before giving way to blank ruled pages on which you can jot your own notes. Atmospheric, engrossing, and designed with a dynamic in-universe aesthetic, this notebook will make you feel like you're a part of Batman's world.

» Have you read this book? We'd like to know what you think about it - write a review about Batman Ruled Pocket Journal book by Matthew K Manning and you'll earn 50c in Boomerang Bucks loyalty dollars (you must be a Boomerang Books Account Holder - it's free to sign up and there are great benefits!)

Matthew K. Manning is a comic book writer, historian, and fan. He has written many comics for Marvel and DC Comics, including Beware the Batman, Batman, The Batman Strikes!, Legion of Super-Heroes in the 31st Century, Spider-Man Unlimited, and Marvel Romance Redux. When not writing comics themselves, he writes books about the comic book medium and its rich history. He lives in Asheville, North Carolina, with his wife, Dorothy, and their two daughters, Lillian and Gwendolyn.

A Preview for this title is currently not available.
More Books By Matthew K Manning
View All