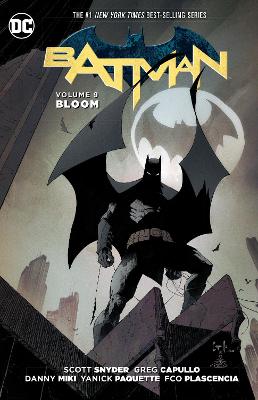 As the new Batman, former police commissioner Jim Gordon is in for the fight of his life against the bizarre threat of Mr. Bloom, who controls plant life in Gotham City! At the same time, an amnesiac Bruce Wayne has discovered the truth of his past as the Dark Knight -- now, he must descend into the Batcave and reclaim that painful legacy. With Bruce back in the cape and cowl once more, can the combined skills of two Batmen defeat Mr. Bloom and his minions?

» Have you read this book? We'd like to know what you think about it - write a review about Batman TP Vol 9 Bloom book by Scott Snyder and you'll earn 50c in Boomerang Bucks loyalty dollars (you must be a Boomerang Books Account Holder - it's free to sign up and there are great benefits!)

Scott Snyder is a #1 NEW YORK TIMES best-selling writer and one of the most critically accalimed scribes in all of comics. His works include BATMAN, BATMAN- ETERNAL, SUPERMAN UNCHAINED, AMERICAN VAMPIRE and SWAMP THING. He has also been published in ZOETROPE, TIN HOUSE, ONE-STORY, EPOCH, SMALL SPIRAL NOTEBOOK, and other journals, and has a short story collection, VOODOO HEART, which was published by Dial Press. He teaches at Columbia University and Sarah Lawrence University and lives in New York with his wife, Jeanie, and his son, Jack Presley.