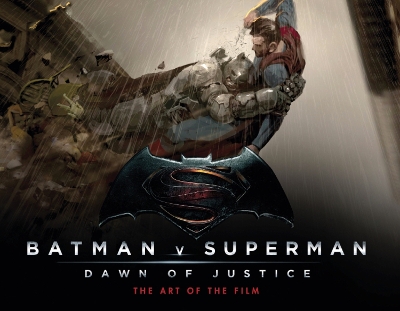 The Art of the Film

The biggest Superhero film of 2016

Fearing the actions of a god-like Superhero left unchecked, Gotham City's own formidable vigilante takes on Metropolis's most revered, modern-day saviour, while the world wrestles with what sort of hero it really needs. Zack Snyder's Batman v Superman: Dawn of Justice sees Batman and Superman come together for the first time on screen. With these two icons at war with one another, a new threat quickly arises, putting mankind in greater danger than it has ever known before.

Batman v Superman: Dawn of Justice: The Art of the Film, takes fans deep into this world, accompanied by insight and interviews with cast and crew, including an afterword by director Zack Snyder. This official companion takes an in-depth look at the artwork and design of 2016's most anticipated movie, including the earliest concept sketches of the Batcave, all the way through the set-building process, to the final version seen on screen. It explores Metropolis and Gotham City from the streets to the skies and showcases the costumes, weaponry, vehicles, allies and enemies of our two heroes. Packed with stunning concept art, Zack Snyder's storyboards, blueprints, costume detail and behind-the-scenes shots from the set, this book is an invaluable insight into the world of Batman v Superman: Dawn of Justice.

» Have you read this book? We'd like to know what you think about it - write a review about Batman v Superman: Dawn of Justice book by Peter Aperlo and you'll earn 50c in Boomerang Bucks loyalty dollars (you must be a Boomerang Books Account Holder - it's free to sign up and there are great benefits!)

Peter Aperlo is an LA-based writer whose credits include the screenplay to the video game 300: March to Glory. He is the writer of the Watchmen: The Film Companion and Watchmen: The Art of the Film.

A Preview for this title is currently not available.
More Books By Peter Aperlo
View All