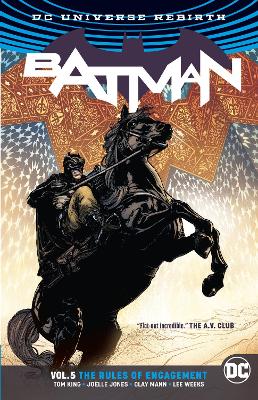 Following Catwoman's answer to his marriage proposal, Batman leaves Gotham City on a quest of renewal and redemption in the desert. As he travels and fights, he encounters members of his family--each disturbed by Batman's journey, each ready to stand in his way and push back against his stubborn determination to evolve into something better than a superhero.

Has the Caped Crusader passed the point of no return? He's going to need a little help from his friends, but this help comes with a downside- Batman's true intentions will be exposed.

» Have you read this book? We'd like to know what you think about it - write a review about Batman Vol. 5 Rules Of Engagement (Rebirth) book by Tom King and you'll earn 50c in Boomerang Bucks loyalty dollars (you must be a Boomerang Books Account Holder - it's free to sign up and there are great benefits!)

Tom King is a comic book writer and novelist, best known for his work at DC Comics including BATMAN, GRAYSON and THE OMEGA MEN. He often relies on his experience as an ex-CIA agent and experiences during the recent conflicts in the Middle East in his writing, especially apparent in GRAYSON (alongside co-writer Tim Seeley), THE OMEGA MEN and in SHERIFF OF BABYLON, published under the Vertigo imprint.