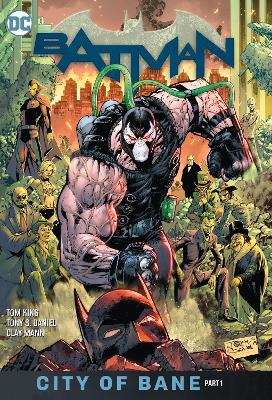 Eisner Award winner Tom King reunites with Mikel Janin as he continues his best-selling Batman run. Batman faces his most personal battle yet as he is locked in a life or death battle with... his father?

Ever since Batman's impending wedding went south on him, the Caped Crusader has had the sinking suspicion that there has been someone lurking in the shadows setting events into motion. After the attempted assassination of Nightwing he starts to question his commitment to his war on crime, his relationships and even his own sanity.

There has been an unseen hand orchestrating these events. And while the true villain has yet to reveal himself, his minions are starting to step forward and break the Bat down once and for all--beginning with Thomas Wayne, the Batman from the Flashpoint Universe!

» Have you read this book? We'd like to know what you think about it - write a review about Batman Volume 12: City of Bane Part 1 book by Tom King and you'll earn 50c in Boomerang Bucks loyalty dollars (you must be a Boomerang Books Account Holder - it's free to sign up and there are great benefits!)