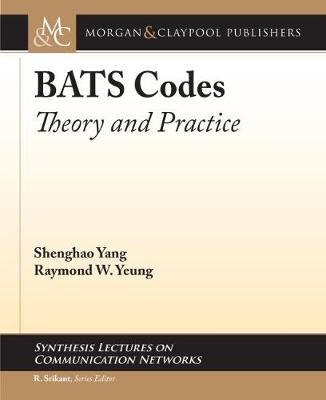 Multi-hop wireless networks have applications in the Internet of Things (IoT), space, and under-water network communications, where the packet loss rate per network link is high, and feedbacks have long delays and are unreliable. Traditional schemes like retransmission and fountain codes are not sufficient to resolve the packet loss so that the existing communication solutions for multi-hop wireless networks have either long delay or low throughput when the network length is longer than a few hops. These issues can be resolved by employing network coding in the network, but the high computational and storage costs of such schemes prohibit their implementation in many devices, in particular, IoT devices that typically have low computational power and very limited storage.

A BATS code consists of an outer code and an inner code. As a matrix generalization of a fountain code, the outer code generates a potentially unlimited number of batches, each of which consists of a certain number (called the batch size) of coded packets. The inner code comprises (random) linear network coding at the intermediate network nodes, which is applied on packets belonging to the same batch. When the batch size is 1, the outer code reduces to an LT code (or Raptor code if precode is applied), and network coding of the batches reduces to packet forwarding. BATS codes preserve the salient features of fountain codes, in particular, their rateless property and low encoding/decoding complexity. BATS codes also achieve the throughput gain of random linear network coding.

This book focuses on the fundamental features and performance analysis of BATS codes, and includes some guidelines and examples on how to design a network protocol using BATS codes.

» Have you read this book? We'd like to know what you think about it - write a review about BATS Codes book by Shenghao Yang and you'll earn 50c in Boomerang Bucks loyalty dollars (you must be a Boomerang Books Account Holder - it's free to sign up and there are great benefits!)

Shenghao Yang was born in China on March 19, 1978. He received his B.S. degree from Nankai University in 2001, an M.S. degree from Peking University in 2004, and a Ph.D. degree in Information Engineering from The Chinese University of Hong Kong in 2008. He was a visiting student at the Department of Informatics, University of Bergen, Norway in Spring 2017. He was a Postdoctoral Fellow in the University of Waterloo from 2008 to 2009 and in the Institute of Network Coding, The Chinese University of Hong Kong from 2010 to 2012. He was with the Tsinghua University from 2012 to 2015 as an Assistant Professor. He is currently a Research Assistant Professor at The Chinese University of Hong Kong, Shenzhen. His research interests include network coding, information theory, coding theory, network computation, big data processing, and quantum information. He has published more than 40 papers in international journals and conferences. He is a co-inventor of BATS code and has two U.S. patents granted. Raymond W. Yeung was born in Hong Kong on June 3, 1962. He received B.S., M.Eng., and Ph.D. degrees in electrical engineering from Cornell University, Ithaca, NY, in 1984, 1985, and 1988, respectively. He was on leave at Ecole Nationale Superieure des Telecommunications, Paris, France, during Fall 1986. He was a Member of Technical Staff of AT&T Bell Laboratories from 1988 to 1991. Since 1991, he has been with the Department of Information Engineering at The Chinese University of Hong Kong, where he is now Choh-Ming Li Professor of Information Engineering. Since January 2010, he has been serving as Co-Director of the Institute of Network Coding at The Chinese University of Hong Kong. He was a Consultant at the Jet Propulsion Laboratory in Pasadena, CA, on a project to salvage the malfunctioning Galileo Spacecraft, and a Consultant for NEC, USA. He is the author of the textbooks A First Course in Information Theory (Kluwer Academic/ Plenum 2002) and its revision Information Theory and Network Coding (Springer 2008), which have been adopted by over 100 institutions around the world. In Spring 2014, he gave the first MOOC in the world on information theory that reached over 25,000 students. His research interests include information theory and network coding. Dr. Yeung was a member of the Board of Governors of the IEEE Information Theory Society from 1999 to 2001. He has served on the committees of a number of information theory symposiums and workshops. He was General Chair of the First and the Fourth Workshop on Network, Coding, and Applications (NetCod 2005 and 2008), a Technical Co-Chair for the 2006 IEEE International Symposium on Information Theory, and a Technical Co-Chair for the 2006 IEEE Information Theory Workshop, Chengdu, China. He currently serves as an Editor-at-Large of Communications in Information and Systems, an Editor of Foundation and Trends in Communications and Information Theory and of Foundation and Trends in Networking, and was an Associate Editor for Shannon Theory of the IEEE Transactions on Information Theory from 2003 to 2005. He was a recipient of the Croucher Foundation Senior Research Fellowship for 2000/2001, the Best Paper Award (Communication Theory) of the 2004 International Conference on Communications, Circuits and System, the 2005 IEEE Information Theory Society Paper Award, the Friedrich Wilhelm Bessel Research Award of the Alexander von Humboldt Foundation in 2007, and the 2016 IEEE Eric E. Sumner Award (for ""pioneering contributions to the field of network coding""). In 2015, he was named an Outstanding Overseas Chinese Information Theorist by the China Information Theory Society. He is a Fellow of the IEEE, Hong Kong Academy of Information Sciences, and Hong Kong Institution of Engineers. R. Srikant received his B.Tech. from the Indian Institute of Technology, Madras in 1985, his M.S. and Ph.D. from the University of Illinois at Urbana-Champaign in 1988 and 1991, respectively, all in Electrical Engineering. He was a Member of Technical Staff at AT&T Bell Laboratories from 1991 to 1995. He is currently with the University of Illinois at Urbana-Champaign, where he is the Fredric G. and Elizabeth H. Nearing Endowed Professor of Electrical and Computer Engineering and a Professor in the Coordinated Science Lab.