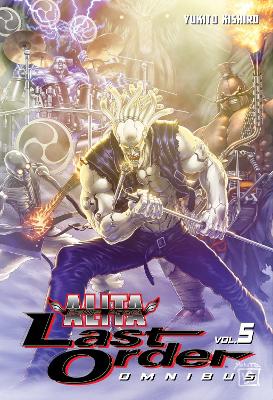 THE SHOW MUST GO ON

THE SHOW MUST GO ON

After nearly being canceled, the Z.O.T.T. resumes and now inches towards its conclusion with the Space Angels going head-to-head against new, formidable opponents that push their combative skills to the limit. With Alita jumping back into the fray, the independence of Tiphares and the scrapyard are depending on her victory, and with her new, seemingly unstoppable abilities, triumph seems to be nearly at hand for the Space Angels. However, behind the scenes, Mbadi and other nefarious entities are plotting to turn things around on Alita and her friends as the Z.O.T.T. continues into its final round.

» Have you read this book? We'd like to know what you think about it - write a review about Battle Angel Alita: Last Order Omnibus 5 book by Yukito Kishiro and you'll earn 50c in Boomerang Bucks loyalty dollars (you must be a Boomerang Books Account Holder - it's free to sign up and there are great benefits!)

When he was only seventeen, Yukito Kishiro was nominated for Japanese publisher Shogakukan's Best New Comic award. Creator of other popular manga titles, Kishiro is known for his strong characters, original settings, and intricate, lifelike artwork.