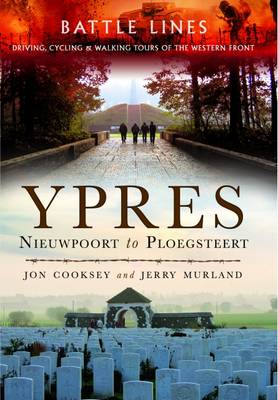 BATTLE LINES YPRES, the first volume in Pen & Sword's new series of walking, cycling and driving guides to the Western Front, is the essential companion for every visitor to the Ypres Salient and the battlefields of Belgium. Many of the most famous - and most memorable - Great War sites are featured here. Expert guides Jon Cooksey and Jerry Murland take visitors over a series of routes that can be walked or biked or driven, explaining the fighting that occurred in each place in vivid detail. They describe what happened, where it happened, and why, and who was involved, and point out the sights that remain there for the visitor to see. Their accounts give a fascinating insight into the landscape of the front line and the acts of war that took place there a century ago. ILLUSTRATIONS: 100 b/w

» Have you read this book? We'd like to know what you think about it - write a review about Battle Lines: Ypres book by Jon Cooksey and you'll earn 50c in Boomerang Bucks loyalty dollars (you must be a Boomerang Books Account Holder - it's free to sign up and there are great benefits!)

Jon Cooksey is a leading military historian who takes a special interest in the history of the world wars and the Falklands War. He is the former editor of Battlefields Review and the current editor of Stand To!, the journal of the Western Front Association, and his articles have appeared in many of the foremost military magazines and in national newspapers. As an experienced battlefield guide, he regularly leads tours to the battlefields of both world wars as well as the Falkland Islands. Jerry Murland is a well-known battlefield guide and author of histories of the Great War

A Preview for this title is currently not available.
More Books By Jon Cooksey
View All