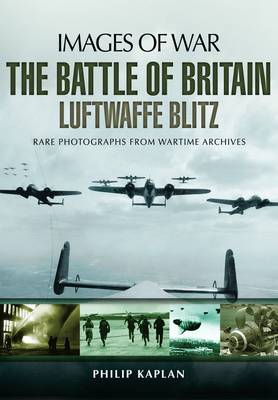 The Battle of Britain: Luftwaffe Blitz

Description - The Battle of Britain: Luftwaffe Blitz by Philip Kaplan

After its attack on Poland in 1939, Britain and France had declared war on Germany. The Germans were suddenly in a war they had risked and now had to fight, and they planned an invasion of Britain to destroy that enemy's potential for making war. The plan, Operation Sea Lion, called for implementation by the autumn of 1940 and depended on German forces defeating and eliminating the Royal Air Force, clearing the English Channel of British mines, dominating the coastal zone between occupied France and England with heavy artillery, and eliminating the Royal Navy as a threat. German success relied heavily on its air force, the Luftwaffe, dealing with the R.A.F quickly and efficiently and gaining air superiority over Britain with a series of concentrated bombing attacks throughout the British Isles. Winston Churchill called what followed "the Battle of Britain" - fifteen weeks of aerial combats, much happening directly above the towns and villages of England. The threatened invasion never came. Herman Goring's vaunted air force failed to achieve the prerequisites for Sea Lion and Adolf Hitler was forced to call it off. The Luftwaffe bombing raids on Britain continued, however, into mid-May 1941, resulting in an unprecedented fifty-seven night campaign of horror for the British people. The airmen of Goring's bomber force, sometimes referred to as 'eagles', were a unique breed involved in a remarkable experience, a prolonged, dramatic, strategic bombing effort that was met and challenged by a relatively small force of R.A.F fighter pilots determined to do whatever it took to prevent the enemy invading. The ferocity of fight they put up left the German bomber crews in no doubt about the sort of threat they faced. "The Battle of Britain: Luftwaffe Blitz" offers a gripping, graphic view of the routine repeated each day and night, from the summer of 1940 through the following spring, by the German bomber crews bringing their deadly cargoes to Britain. Through mainly German archival photos, it features images of the airmen on their French bases and in the skies over England; the aircraft they flew, fought and sometimes died in; their leaders; their targets and results; the R.A.F pilots and aircraft; and the losses. The images, from the Bundesarchiv and other German and British photographic sources, vividly convey a real sense of events as they played out, as do the compelling memories of many on both sides, participants and eyewitnesses to one of the most brutal sustained bombardments of the Second World War. ILLUSTRATIONS: 150-200 b/w photographs

» Have you read this book? We'd like to know what you think about it - write a review about Battle of Britain: Luftwaffe Blitz book by Philip Kaplan and you'll earn 50c in Boomerang Bucks loyalty dollars (you must be a Boomerang Books Account Holder - it's free to sign up and there are great benefits!)

Philip Kaplan has written or co-authored and designed twenty books, including; One Last Look, Abbeville Press, 1988; Little Friends, Random House, 1993, Fighter Pilot, Aurum Press, 2002. He is the author of several Pen and Sword publications including Night and Day Bomber Offensive (2006), Fighter Aces of the Luftwaffe in World War II