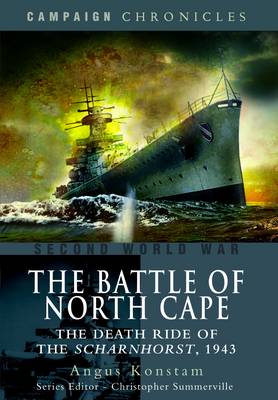 The Battle of North Cape

The Death Ride of the Scharnhorst, 1943

Description - The Battle of North Cape by Angus Konstam

On 25 December 1943 the German battlecruiser Scharnhorst slipped out of Altenfjord in Norway to attack Arctic convoy JW55B which was carrying vital war supplies to the Soviet Union. But British naval intelligence knew of the Scharnhorst's mission before she sailed and the vulnerable convoy was protected by a large Royal Naval force including the battleship Duke of York. In effect the Scharnhorst was sailing into a trap. One of the most compelling naval dramas of the Second World War had begun. SELLING POINTS: .Compelling account of the doomed voyage of the German battlecruiser. .Insight into the experience of naval warfare 60 years ago. .Assesses the performance of the two commanders. .Close analysis of the naval strategy and tactics. AUTHOR: Angus Konstam is a highly respected and widely published military historian. The body of his work encompasses everything from ancient Greece to the Second World War. However, his main field is maritime and naval history. He has published books on Blackbeard: America's Most Nortorious Pirate, The History of Pirates, PT Boats: US Naval Topedo Boats, The History of Shipwrecks, Hunt the Bismark and the 7th U-Boat Flotilla. His most recent books include Salerno 1943: The Allied Invasion of Italy and Piracy: The Complete History. Angus lives in Edinburgh, and can be visited on his website: www.anguskonstam.com REVIEWS "Angus Konstam's gripping account tells the story of this crucial but under-studied naval battle, and explains why the hopes of the German Kreigsmarine went down with their last great ship: only 37 of the German battlecruiser's 1700 crew were saved" The Nautical Magazine "This book illuminates this forgotten and overlooked battle like an unexpected enemy starshell bursting out of the Arctic night". IPMS "Angus Konstam's book is an excellent read and strongly recommended....thoughtful and totally engrossing....If you are interested in the Royal Navy in the Second World War, the Arctic convoy campaign or capital ship actions, The Battle of the North Cape is well worth its cover price". Naval Review ILLUSTRATIONS: 40 illustrations *

Book Reviews - The Battle of North Cape by Angus Konstam

» Have you read this book? We'd like to know what you think about it - write a review about Battle of North Cape book by Angus Konstam and you'll earn 50c in Boomerang Bucks loyalty dollars (you must be a Boomerang Books Account Holder - it's free to sign up and there are great benefits!)