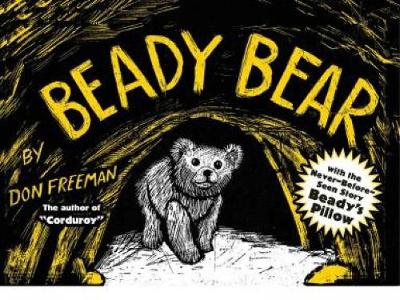 with the Never-Before-Seen Story Beady's Pillow

Upon its 1954 debut, the cuddly classic Beady Bear was praised by The New York Times as ""the kind of book small children will delight in."" Don Freeman, author of the acclaimed children's story Corduroy, recounts the whimsically illustrated tale of a wind-up toy who longs to live like a real bear. When Beady learns that bears are brave and live in caves, he resolves to give it a try - and discovers that being real is actually about loving and being loved.This longtime favourite is presented for the first time with its previously unpublished sequel, Beady's Pillow, another heartwarming charmer only recently discovered by the author's son. Beady's friend Thayer sets out to retrieve a pillow that the adventurous bear has lost, and when Thayer disappears into a cave and doesn't come out, Beady has a chance to prove his bravery.

» Have you read this book? We'd like to know what you think about it - write a review about Beady Bear book by Don Freeman and you'll earn 50c in Boomerang Bucks loyalty dollars (you must be a Boomerang Books Account Holder - it's free to sign up and there are great benefits!)

Don Freeman is known to many as the author of Corduroy and other children's books. He is also famed as a graphic artist who vividly portrayed the street life and theater world of New York City in the 1930s and '40s. He studied etching with John Sloan and frequently portrayed subjects from Broadway theater, politics, and the circus.

A Preview for this title is currently not available.
More Books By Don Freeman
View All