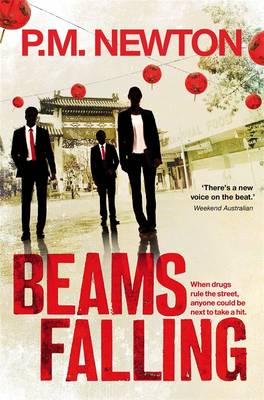 Beams Falling is the brilliantly compelling and gritty second novel by the rising star of Australian crime writing. A portrait of our recent past, it's also a compulsive and utterly authentic insight into the way both cops and criminals work.
On the inside, Detective Nhu 'Ned' Kelly is a mess. Stitched up after being shot, her brain's taking even longer to heal than her body. On the outside, though, she's perfect, at least as far as the top brass are concerned. Cabramatta is riding high on the new 'Asian crime wave', a nightmare of heroin, home invasions, and hits of all kinds, and the cops need a way into the world of teenaged dealers and assassins.

They think Ned's Vietnamese heritage is the right fit but nothing in Cabra can be taken at face value. Ned doesn't speak the language and the ra choi - the lawless kids who have 'gone out to play' - are just running rings around her. The next blow could come from anywhere, or anyone. And beyond the headlines and hysteria, Ned is itching to make a play for the kingpin, the person behind it all with the money and the plan and the power.

Beams Falling is the brilliantly compelling and gritty second novel by the rising star of Australian crime writing. A portrait of our recent past, it's also a compulsive and utterly authentic insight into the way both cops and criminals work.

P.M. Newton spent over a decade as a detective in the NSW police force, including time in Sydney's southwest and the Drug Enforcement Agency. Her first novel was the acclaimed The Old School.

'Newton has a brilliant way with words - her descriptions of settings so accurate you can smell the markets, the dirty back streets, and the decay... Detective Nhu 'Ned' Kelly is a wonderful female protagonist - she is complex, likable, stressed, determined and compassionate ... A great read!' Reading, Writing and Riesling

'The greatest strength of this novel, like its predecessor, is the depiction of daily police work. No one has done this better than Newton . . . the crime novel needs to break out of its conventional treatment of plot and character from time to time, and Newton is possibly doing something important here, whatever the reason. Beams Falling is an odd book, and a terrific one.' The Saturday Paper

'Newton's gift for characterisation and her acute eye for detail result in authentic and compelling descriptions of Vietnamese society and life in Cabramatta.' West Australian

'It's precisely the unshowy tautness of Newton's books and character-rich, layered plotting that becomes their strength. As Beams Falling starts to really grip, about halfway through, it feels as if it has more substance than many of its showier competitors.' The Australian

'This is an exceedingly well written and convincing novel that excels in its characterisations and subtle plotting . . . a first-class crime novel.' The Sunday Canberra Times 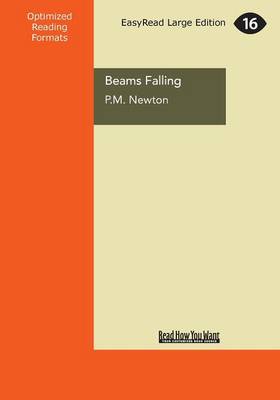 » Have you read this book? We'd like to know what you think about it - write a review about Beams Falling book by P.M. Newton and you'll earn 50c in Boomerang Bucks loyalty dollars (you must be a Boomerang Books Account Holder - it's free to sign up and there are great benefits!)

Ex-cop P.M. Newton burst onto the Australian crime writing scene four years ago with her impressive debut The Old School. Newton’s distinctive style and experience brought a point of view sadly missing from most Australian crime novels. And the introduction of Detective Nhu ‘Ned’ Kelly was a welcome change from the usual clichéd lead character in Australian crime fiction. Set in the early 1990s Newton explored a world of corruption, racism and sexism, where history weighs heavily on everybody’s shoulders.

I am going to go out on limb here (a very sturdy limb) and state now that I thinkBeams Falling is even better than The Old School. Beams Falling takes up where The Old School left off. One of the pitfalls of many crime series is continuity. Often the hero comes back in the next installment, slightly scarred, but ready to continue the fight, with few hangovers (so to speak) from past cases or events. But one of the great things about P.M. Newton’s writing is the authenticity she brings to the page. Yes there is a murder to solve in this book but one of the main parts to this novel is Ned’s recovery, physical and mental, to the horrific events at the end of The Old School.

After recovering in hospital and working the system Ned is passed fit to return to work. However her old station doesn’t want her back after what she did. She eventually ends up in Cabramatta, part of a task force assigned to crack down on the rising crime in the area. To the media she is now a hero cop and the brass are going to milk that for all it’s worth. When two young boys are gunned down in separate incidents, more victims in the never-ending drug war, Ned realizes the hard way she is not ready to come back to the job and must now confront the possible bitter truth about whether she actually wants the job back at all.

Newton has packed so much into this book. This is not only an intricate crime mystery but a fascinating exploration of the social, political and economic impact of migration in Sydney’s west. Newton shows there is much more to Cabramatta than what the media fed us in the 1990s and shows the human side and the human cost of a so-called “war” on drugs. At the same time Newton explores the complex issue of corruption, demonstrating the varying degrees and guises it can take, the consequences it has and how the concept of good and bad, right and wrong gets totally and utterly blurred. Combined with the psychological aspect and Newton has produced a truly remarkable novel.

Fresh from an Arts degree, P.M. Newton joined the New South Wales police force in 1982. She spent the next thirteen years working in and around Sydney in various departments - Drug Enforcement, Sexual Assault, Major Crime - first in uniform, then as a detective. When she had eventually had enough of meeting people for the first time on the worst day of their lives, Newton resigned from the Job to travel and live overseas. She now lives in Sydney. Her first novel, The Old School, won the Sisters in Crime Davitt Award and the Asher Literary Award, and was shortlisted for the Indie Award for Debut Fiction and the Ned Kelly Award for Best First Fiction.